On September 17, 1787, delegates left the Constitutional Convention in the Independence Hall in Philadelphia.  As they exited, Benjamin Franklin was asked what kind of government do we have?  "A Republic," he replied, "if you can keep it."

As you find on FT web, I write about the country of Georgia, located in Caucasus, neighboring Russia, Turkey, Armenia and Azerbaijan. It is not surprising, that Georgia faces an internal and external threats from anti-western, anti-democratic forces, such as Russia and Russian backed violent groups. I can’t avoid mentioning latest events that happened in 2021.

After 2020 parliamentary elections which was outstanding from other ones in terms of rigging, violence, bribery and total sabotage of political opposition, Georgian civil society, political parties and voters came out to protest undemocratic events. It’s not surprising, that authoritarian leaning governments count protesters, rather listening them and situation in Georgia was not exception. After street gatherings opposition parties declared, that they will not participate in newly elected Parliament. It was second boycott in 12 years range. The biggest opposition party – United National Movement (UNM) with the half million voters demanded reelection with small pro-western, pro-democratic parties.

It was the major process that showed how the Georgian government and society were on the different brinks of the river, even in terms of Euro-Atlantic aspirations, Russian occupation, economic problems and poverty. Partly, it is not new, that governments economic policy does not answers on the poverty questions, but truly it was new era in history of Georgia, when troll-bots and government backed quasi - intellectuals were powering on the biggest anti-western, anti-liberal mudflow. Georgian Dream has it’s “catch all” members such as pro-western, pro-Russian, pro-neutral, pro-Georgian actors; western educated MPs for EU and US and other ones for less important spectacles. For some political analysts it was very clear in 2012, when GD came to power, that billionaire Bidzina Ivanishvili was waking up 90’s corrupt, failed and anti-liberal Genie from the bottle, but it has not seen widely by society until 2021.

In March, Charles Michel, Belgian politician serving as President of the European Council negotiated with both parties and EU-brokered Charles Michel deal was signed, except UNM, European Georgia and Labor Party. Part of the opposition and Georgian Dream celebrated this deal as a breakthrough, but when the biggest opposition party with 500 thousand voters is out of the game, something goes wrong. If you check this deal, you will find the most interesting article, that if GD gets less than 43% in Municipal Elections this year, it will agree on pre-term, early parliamentary elections. 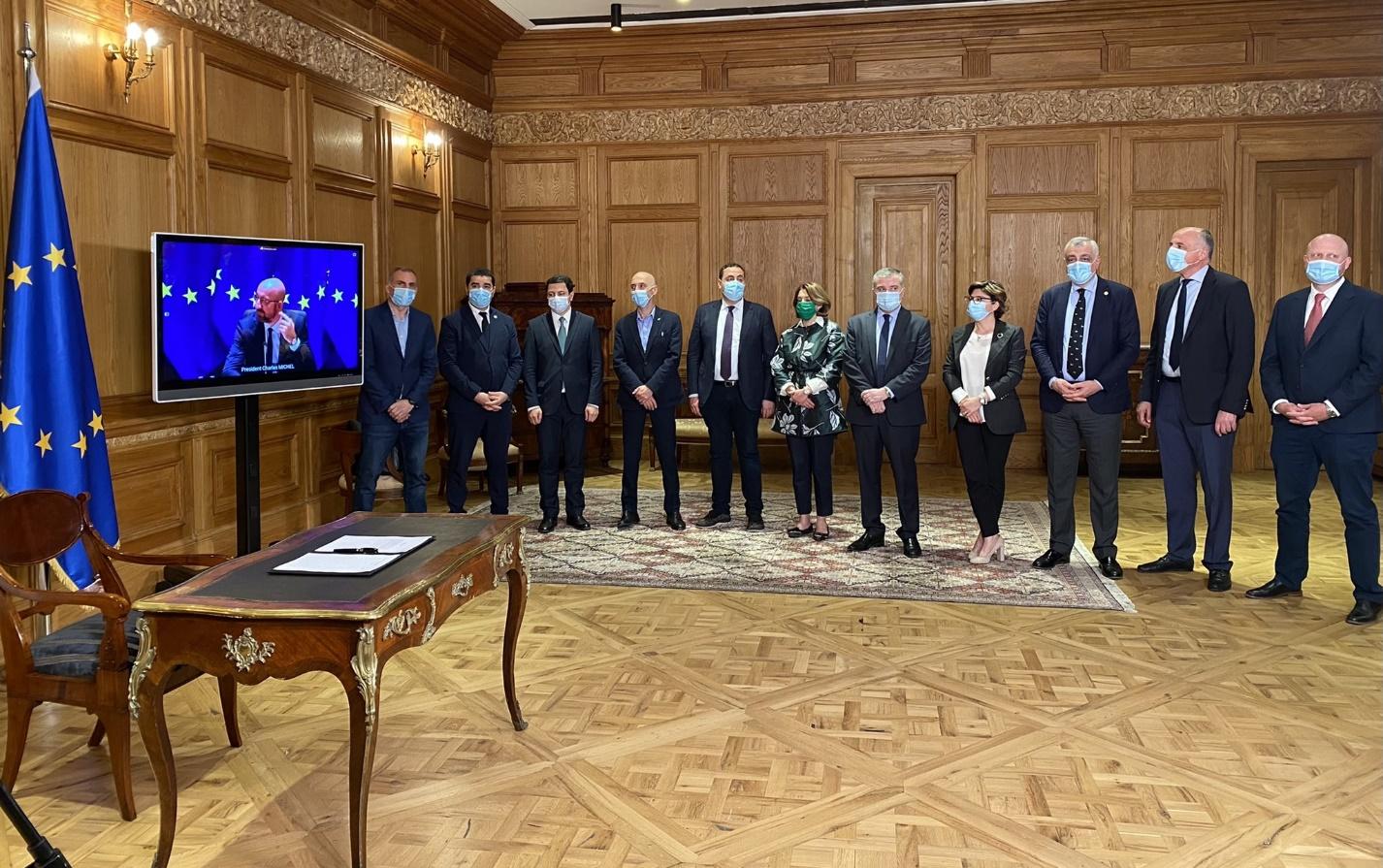 After all of this events, UNM entered parliamentary building arguing, that until Municipal Elections it will impact on their political strengthening and weaken government opponents. Some opposition leaders argued against Charles Michel deal, calling it more problematic and giving GD more green light for violence, opponent demonizing and anti-democratic frames.

On July 5th, Georgian LGBTQI community planned pride march against homophobia, transphobia and violence against vulnerable people, who were under the threat from Orthodox Church supporters and pro-governmental, anti-western groups. It was lucid, that Georgian Dream will not protect LGBTQI rights to express their opinion. On the other hand, government statements and actions were against the pride. Prime-Minister Irakli Gharibashvili stated about pride, that this groups are part of the opposition groups, aiming to destabilize country and its political situation. 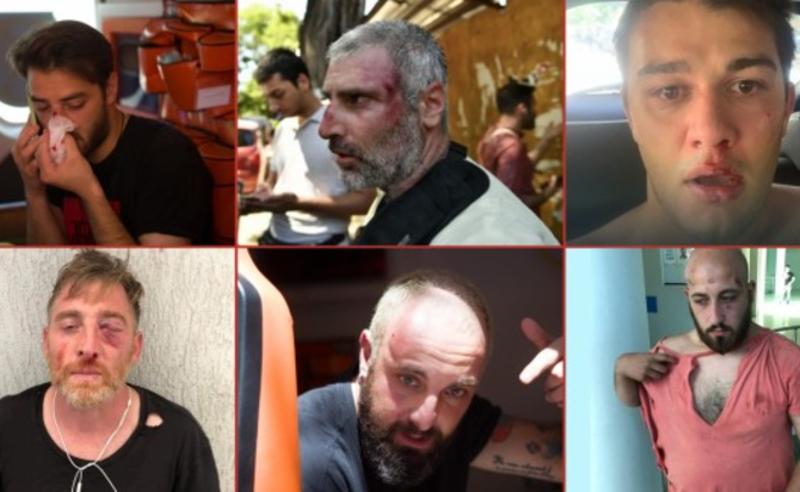 On July 5th violent, pro-Putin, church and government backed people started beating pride members, pro-western media journalists and opposition supporters, taking off EU flag from the parliament building. After this events, sorely injured journalist Aleksandre Lashkarava found dead in his home. After minutes of this information government backed troll-bots started examination some message box about Lashkarava, that he used hard drugs and etc. All this days in history of Georgia is outstanding among others in terms of total anti-western propaganda, mobilizing violent forces and what is the most important thing: first in 30 years history of Georgian state PM of country stated against western backed organizations, parties, activists labeling them as enemies.

Our deeply concerned western allies reminded government officials about their duties and responsibilities, some house members of  US stated about sanctioning government officials, but it’s time to clearly say – Georgian Dream’s only duty and responsibility is to protect oligarch Bidzina Ivanishvili and his family, not other Georgians, constitution or country’s Euro-Atlantic aspiration possibilities.  After all of this events, Georgian Dream withdrew from EU-brokered Charles Michel deal, underlying that there will not be any pre-term elections if GD gets even only 3% of total votes.

What that means for Georgia?

After 2012, peaceful transition of power, Georgian dream came to power as a reaction to the Rose Revolution reforms, aiming to jail former government officials. For many political analysts it was very clear that GD and its Bidzina Ivanishvili were retrogrades against future chance to establish liberal democracy, protect human rights and civil liberties. Unfortunately, from my point of view, Georgia is not a hybrid regime anymore, it’s authoritarian state. We have a clear example of state seizure.

What is the way out?

US – EU has backed Georgia to establish liberal democracy, to protect constitutional order and civil liberties. US has spent more than 4 billion dollars in Georgia and remains the biggest contributor for development in historical 30 years of independence from Soviet Union. Indeed, there’s a way for Americans and Europeans to help civil society and political opposition against authoritarian rule, it is not first attempt by Russian oligarchs to take control in neighboring countries such as Ukraine, Moldova or Georgia, but first two countries are on the brink nearing western reforms and institutional improvements, but Georgian peaceful transition of powers failed, it did not strengthen or establish democratic foundations. It’s not clear for important part of the society that electoral democracy can change the status quo. Total nihilism and despair – it’s the main engine for Georgian Dream, but if political opposition and western allies try to fracture this despair situation – Georgia will continue moving on west rails. But today, it’s totally clear that Georgia became authoritarian state, anti-western, anti-liberal oligarch seized the power.